So, what about that Holdsworth?

Readers with long memories may recall my plan to touch up the worst of the paint damage on my Holdsworth Professional frame and build it into a late 60s racing steed as it once was.
The more astute among you might well infer that my long silence on the subject says that all is not well.

After months of desultory action, I gave up on my efforts to touch up the paintwork, ordered a set of transfers from Lloyds and entrusted the job to the multi-talented Walter Thorburn.

A couple of weeks later, Walter called to tell me that beadblasting had exposed a crack underneath the bottom headlug. Being financially and emotionally invested in the project, I rejected the idea of chucking the frame in a skip, and set to replacing the downtube and headlug. 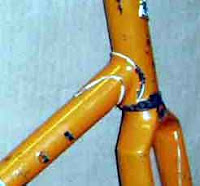 The first problem is that I needed a plain, long point headlug.
The Holdsworth's lugs look like a modified Prugnat Type S, which are probably fairly easy to find, but I decided it was better to make some progress while I was still in the mood.
I dug out a set of Prugnat lugs with triangular cutouts and a some bits of scrap tube, and brazed bits of steel tube scrap into the cutouts. After a morning of filing and sanding I had a passable lookalike of the original.

I quite probably have the correct Reynolds 531 downtube in my inventory, but chose to use Ishiwata 024, because it was closer to the top of the pile, just the right length, and a bit heavier, which seems appropriate on a frame that is earmarked for this year's edition of l'Eroica.
It's a few years since I have replaced a downtube, but to my eyes the end result doesn't look too bad at all.

While I had the frame back, I took the opportunity to cold set the rear dropouts to 126mm so that I can use a 7 speed freewheel. Usually my inner purist would frown at this, but I figure that I was already across the line in the sand when I decided to get the frame repainted, and anyway, a sub-athlete like me needs a wide range of gears for a life threatening outing like Eroica. In response to Oli's question in the comments on the last posting:

When the Condor frame arrived on Tuesday, I had collected most of the parts I thought I would need, and even built up a nifty pair of suitable tubular wheels.
Some of them have worked out, and some others caused me a bit of grief in the attempt to get the bike rideable for the SOLO bunch ride on Friday morning.

First up, the frame needed some love before any parts went on.
At some time the BB threads have been stripped, and rebuilt with bronze, so I ran the Campag taps through, and faced the shell.
The headtube had never been reamed, and is splayed from having oversized headset cups pressed in, so I reamed and faced with the Campag tool, skimming a couple of millimetres off the overall length to accomodate the still-low stack height of the Campagnolo Gran Sport headset.
The forkblades were bent to the right. I did a fair job of straightening them, using my Hague fork jig as a reference, but I may yet ask Oli Brooke-White to get them perfect on his world famous VAR fork straightening jig.

The drivetrain went through a few iterations.
The Campagnolo Record derailler that I wanted to use didn't have the capacity for the 52/42 rings and 14-26 freewheel, so I swapped it for a 1970 Nuovo Record, which turned out to be too worn to use.
Third time lucky, I degreased an '81 Nuovo Record as an interim solution.
Eventually, I'll get the drivetrain configured to work with the Record derailler.

The Campagnolo crankset, bottom bracket and pedals are all temporary.
I have a set of Campag 'con denti'* track pedals in need of a home, and a lead on a set of TA Professional* cranks.

Where I can, I use Suntour Ultra-6 freewheels on bikes with 120mm dropout spacing, but on the Condor the chain catches on the seatstay when shifting from the smallest sprocket. I dug up a nice looking Suntour Perfect 5 speed freewheel, but one of the sprockets was too worn, so I am using the largest 5 sprockets on an Ultra-6 14-24 until I can get an IRD 5 speed 13-24 from the House of Dogboy.

Most of my English bikes have centrepull brakes, so I was planning to use a pair of Universal Super 68 sidepulls, until I found a set of unused Universal Extra calipers lurking in a box of Trademe acquisitions. These are the 'period correct' Universal sidepull, so the 68s can wait for another project.
The gold Universal brakelevers are undeniably a taste crime, but I want to milk the last mileage out of their perished and tattered gum hoods before I swap them for a pair in plain aluminium.

The Condor is landed Stu Hills latest blog is compulsory reading.
Posted by David Benson at 11:29 AM No comments: