The last time I rode the event formerly known as the Pack'n'Pedal 100k, an English gent in our bunch described my 1995 Benson as a 'nice winter bike', which made me somewhat unreasonably defensive. I pointed out that Auckland is a rainy town, and that I thought it sensiblefor a non-racing person to ride year-round with mudguards. Then I blurted out that I had lighter, shinier bikes for more meteorologically auspicious days, which pretty much proved his point. 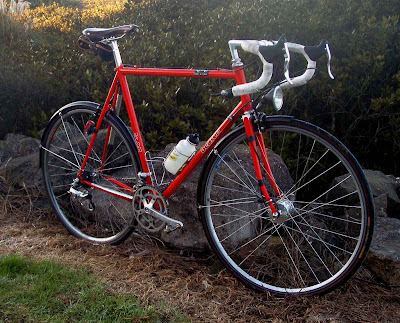 This year, I've stopped trying to deny it.
The Benson is back, in trad winter bike guise, with new Bluemels mudguards and the Schmidt dynamo and Bisy light. 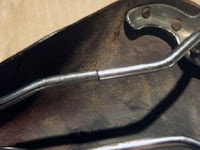 Riding the demountable home through the Otahuhu Railway Yards tonight, the rail on my best Brooks B17 broke.
Bought in 1998 from Rivendell Bicycle Works, I was hoping for a couple of decades more riding.
The dilemma now is whether to buy a new one, or to press into service one of the Brooks Professional lingering in the shed. I would have bought a Pro back in 1998 if they had come with saddlebag loops, a shortcoming that I have since addressed by making a couple of stainless steel brackets. 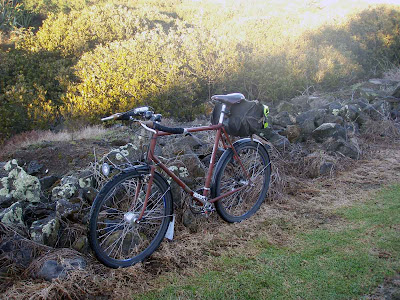 Check out Andy Hampsten's bike on cyclingnews.com
Posted by David Benson at 10:52 AM 1 comment:

You can take him anywhere once... 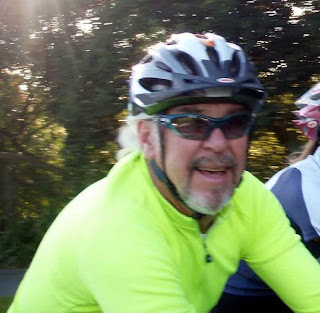 ... Wayne Sullivan, that is, whose email report of the excellent Broomie's Wall Ride eclipses anything I could have composed myself.

Some names have been omitted to protect the innocent.

Subject: THE WALL - BRAGGING RIGHTS
Hey Monkeyman,
This short correspondence to keep you up to speed and advise you of what you missed out on.

We did it as promised while you lay comatose in your lovers arms.

It was a loose pelican of riders that trundled South and wound our way around some nice country roads to the base of the Bombay's and over a few small lumps (some of which I thought were a bit "wall like") until at last there it was, rising before us like a gray curtain on a green wall. Indeed it was a wall. Fuck!

As we approached this cyclists nightmare I swear I heard an announcement which said "fat people or old people line up at the back please", so I did, and stayed right there until the top, coming over the final crest a sad and sorry last. (But Hell man, it was nothing, I'd do it again tomorrow.)
As I cleared the last bit I swear I heard another voice, this time from somewhere above that said something like "blessed are the weak for they will provide us with mirth" (I think it was a sign from God.)

After this part of the ride I "came right" and rode with some aplomb, and back at Ramarama the bunch stopped for a banana and a beer, but Gaz and I being latish for our tea party, rode on alone (except for a beautiful young escort) The three of us powered all the way back to Otahuhu at a good clip, with my brother in the van for the whole distance and us two (me and the babe) hanging on for grim death.

To summarise I have to say "we done it Mr Monkeyman" and you didn't, now harden the fuck up.......

In anticipation this weekend's ride up Broomie's wall, I decided that the Hurlow needed some lightweight wheels. This proposition won't stand up to critical scrutiny, but the pair of 28h Fiamme Red Label wheels that I got last year from Cycle City have been preying on my conscience for 9 months, so I needed only the slightest excuse to disinter them.

The hubs are early Campagnolo Record, known in vintage bikenerd circles as 'No Record' because the hub shells are marked only with the Campagnolo logo.
From 1963 the hubs were also marked RECORD. 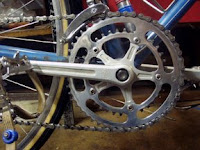 To further enhance my hillclimbing, I swapped out the TA Cyclotouriste cranks for a set of Zeus 177.5s with 36/49 rings.
Combined with a 14-26 Suntour Ultra-6 freewheel, this is right on the limits of the Zeus Criterium derailler's meagre capacity.

A message from Kate Mullarkey:

Hi all,
Having never completed the Auckland icon that is “Broomie’s Wall” I thought I would try and get a group together to tackle it alongside, or more realistically, well in front of me!
Sunday 18 May. 7.45 am leave from top of Meadowbank Road (will make the round loop about 110km); or 8:15 am from 16 Ngaio St, Otahuhu (for those from South Auckland or wanting a round loop of 75km).
Please feel free to invite anyone else who may be interested, as long as they do not half wheel anyone, or consider it acceptable to attack the bunch at any point other than at the base of the wall !!
For those of you who have also never completed Broomie’s wall , a well known Auckland cycling personality describes it below:
"Broomie's Wall, named for legendary coach and 60s roadie wildman Jack Broome, is the 2km steepest pitch on Hillview Rd, Ramarama, as it heads south towards Bombay.
Most Auckland cyclists have seen it from the Southern Motorway and wisely resolved not to investigate further. Whilst Broomie's long-suffering proteges would have made multiple ascents on 42 x 18, a 39 x 25 or compact gearing will be more congenial.”

There has also been rumours that there may be a post-Wall beer stop at a yet to be determined venue.

*defined as any amount of precipitation that continues for long enough to make your shoes wet, or that requires the wearing of rain jacket for longer than a five to ten minute shower.
Posted by David Benson at 10:22 AM 2 comments:

Downloadable from http://www.funcycling.net/documents/okoroire_2008_entry_form.pdf
Posted by David Benson at 10:30 AM No comments: 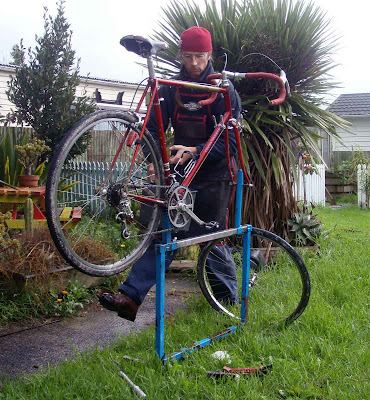 Cecil stood up the abuse pretty well- except for a bit of chainsuck, everything, even the 1970's Campagnolo Record brakes, worked better than I expected.

Once I have Cecil dried off and relubed, there are a yet a couple of unclean singlespeed in the shed from the NZSSC last weekend. 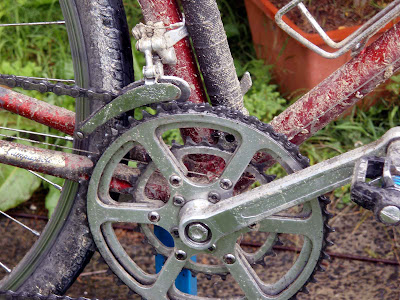 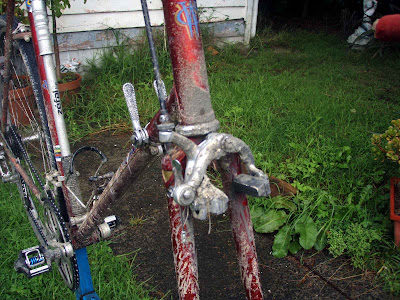 The plan was simple- a dirt road christening for Adam's Breakaway Cross bike. Since he's a westie, Riverhead Forest looked like the best venue.
Invitations were emailed out, and despite fairly miserable weather, eight of us set out this morning from the Swanson Station Cafe: 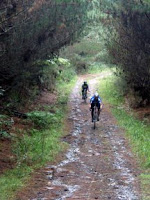 By the time we reached the forest, CTB had peeled off with a sore knee, and Glen called it quits, having forgotten his inhaler.
The rest of us rode into the forest at Browns Road, for the first gravel leg to Ararimu Valley Road via Strip Road.
After turning back into the forest at Campbell Road, we took a wrong turn off Whakatahi Rd that fortuitously took us to the best part of the ride- a muddy four wheel drive track descending to Deacon Road. Thence we guessed our way to Forestry Road, only a couple of kms from our planned lunch stop at Hallertau.

All the photos fit to show your mother 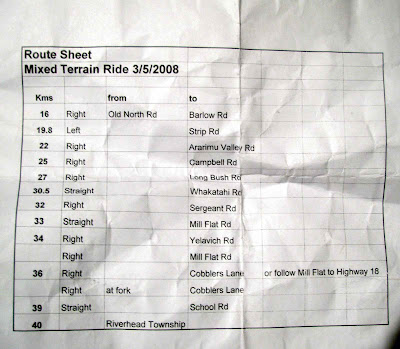