For the last couple of weeks I've been riding the Breakaway to work, and as far on weekends as motivation will allow.

I've changed saddles a few times, finally stealing the Brooks Pro Titanium from the Cecil Walker, though I'll probably go back to the Brooks Swallow when I have some more time to break it in.
I experimented with a couple of modern saddles, but the lack of mounting loops for my new Carradice Camper Longflap saddlebag was the final clincher. I got a beautifully made Bagman quick release adapter with the Camper, but even half-loaded the Camper nearly drags on the tyre. Attached to the Brooks saddlebag loops, the Camper has a couple of inches clearance.

The recent filthy weather drove me to fit a set of Bluemels B35 mudguards.
Unlike their SKS Chromoplastic stablemates, the 35mm Bluemels guards have a round profile which not only looks better, but ought to be a better fit under dual-pivot brakes than the square-ish SKS. 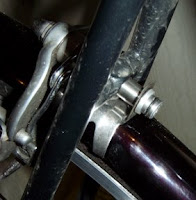 I used a pair of Sheldon nuts to mount the mudguard brackets to the recessed brake bolts.

I would like these better if they had an external hex for spanner, like the nuts that come with the Berthoud carbon fenders, rather than the 6mm allen hex. 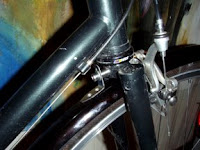 On the positive side, the front nut allows the mudguard to be raised to its maximum height by allowing the mudguard bracket to clear the bottom stack of the headset.
In the past I have removed the bracket entirely and ziptied the guard, in the effective but inelegant Grant Peterson style, to the brake centrebolt .

And finally, today I got to grips with that 12 second delay, self portrait feature on my camera. Here we are, atop Jones Rd, on the way to Hunua. 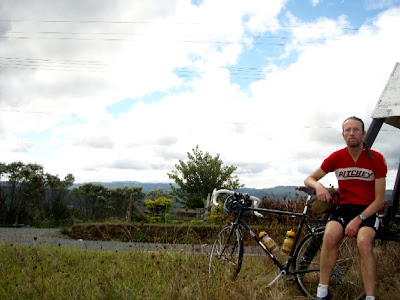 Posted by David Benson at 8:17 PM No comments: 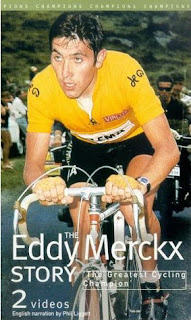 Since their inception last year, the SOLO Movie nights at the Westwinds Cinema in Avondale have been a not-to-be-missed part of the Auckland cycling social calendar.

This month's offering, 'The Eddy Merckx Story' could be more correctly titled 'The Story of Eddy Merckx in the Tour de France", as it gives only brief mention of his World Hour Record in 1972 and glosses over Merckx's other achievements such as his World Championships.
TV and newsreel racing footage is interspersed with subtitled reminiscences by Tour winners Lucien van Impe, Bernard Thevenet, Joop Zoetemelk & Merckx himself.

The next movie night will be on April 18.
Sign up to the Solo email list for an invite.
Posted by David Benson at 10:12 AM No comments:

Have a look at this video over at David Whittam's new blog.
Can anyone put a date to this, or name any of the participants?
Posted by David Benson at 2:05 PM 1 comment: 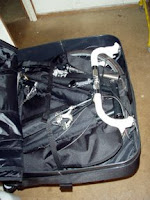 Last week I took the Breakaway to Invercargill so I would have something to ride between sessions of the NZ Track Cycling Championships.

I took this photo to remind myself how the bike should look when packed in it's case, but astute readers will notice that the crucial seat & seatpost are absent.
Fortunately I found them again before we departed.

Needless to say, I didn't get much riding done- the weather was atrocious and the usual Track Nationals combination of malnutrition and lack of sleep kept me inside most afternoons.
Posted by David Benson at 1:02 PM No comments:

If you have already exhausted yesterdays cornucopia of NAHBS links, here are Dennis Stovers photos on the world famous Wool Jersey Gallery.
Posted by David Benson at 8:27 PM No comments:

Email ThisBlogThis!Share to TwitterShare to FacebookShare to Pinterest
Labels: framebuilding 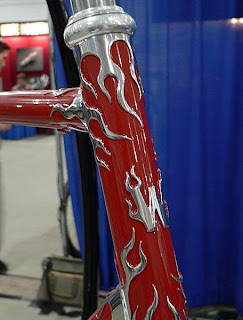 A few people of my acquaintance didn't get much work done today when they found the photos from last weekend's NAHBS posted on the internet.

Over at CycloFiend there is a photo gallery, plus links to other NAHBS photo sites. Be prepared to waste a few hours.

There's not much to dislike, but this Vanilla, built for US collector Brett Horton, stands out for me as a near-perfect synthesis of classic aesthetics with modern technology.

The number of randonneur and porteur bikes is impressive, considering that neither style had any currency in the english-speaking cycling world until Jan Heine started writing about them in the Rivendell Reader in the late '90s, and then in his own Vintage Bicycle Quarterly (now Bicycle Quarterly).
Posted by David Benson at 8:11 PM No comments:

Email ThisBlogThis!Share to TwitterShare to FacebookShare to Pinterest
Labels: framebuilding

Breakaway- complete, if not finished.

Last night I brought home a saddlebag full of stuff to build up the Breakaway, and today I knuckled down and built it up into a rideable device.
Though I could have built up a decent drivetrain out of shed junque, I went for 2007 Campagnolo Veloce 10 speed, with the new Ultra-Torque crankset.

This is meant to be a credit card tourer, so I went for a medium cage rear derailler so I can use a 13-29 cluster in future.
Instead of the standard Ergopower levers, I fitted Record bar-end shifters.
Brakes are Campagnolo Triomphe, which have better tyre & mudguard clearance than dual pivots, actuated by Campagnolo Cobalto brake levers.

The frame is built for a 1-1/8" headset, so I pressed in a set of Wheels Manufacturing headset adapters to suit the 1" fork and Ritchey WCS Logic headset. I am partial to cartridge bearing headsets on demountables because they are unlikely to spill ball bearings onto the ground while the bike is being assembled.

The bike is a long way from being finished- the wheels in the photo are old Campagnolo Electrons with Conti tubulars, and the rock-hard & slippery Benotto bar tape is coming off on Monday.
Crank Brothers Quattro pedals are not compatible with my MTB shoes, so will be replaced with Eggbeaters with the short Ti axles. 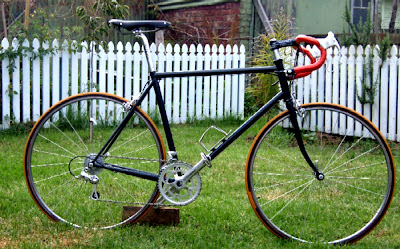 *Disclaimer- I am deeply implicated in the importation and distribution of Crank Brothers, Campagnolo, Ritchey and Continental in New Zealand.
Nothing that I write about them can necessarily be believed.
Posted by David Benson at 8:46 PM No comments: 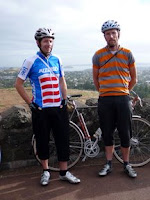 Adam Lovell and me, modelling our Bicycle Fixation wool gabardine knickers atop One Tree Hill on the way back from the Go by Bike Day breakfast.

With time and mistreatment, my Woolistic jersey from Rivendell Bicycle Works will eventually match the Gillott.
Posted by David Benson at 4:24 PM No comments: