P8270081
Originally uploaded by bensondoc
Words fail me, but I'll get some out later today.

13/9/08- so I took two weeks holiday and let my brain go to mush, hence no Mayhem Sessions reportage from me.
Fortunately, all the news thats fit for the inteweb is over at Steady Rolling.

Posted by David Benson at 12:01 PM No comments:

The Mayhem Sessions return to the WINCHESTER for the last time this year on Wednesday Night.
If you have been holding out, or if you have unfinished business from the previous rounds, you won't want to wake up on Thursday morning knowing that you have blown your chances for 2008.

There will be a return of the Girly Bits competition- after upstart Gayle Brownlee gave the field a decent thrashing last week, there must be a few women wanting a chance at revenge?

I predict a spectacular finale for the Fast Rolling Free for All, with Celebrity Economist Chris Tennent-Brown looking like a threat to young lycra-whippets Cull & Hailstone.

Race Schedule
7.00 Entry and scrutineering, entries close at 8.00 or when full
7.30 Fast Rolling Free For All
9.30 Super Elite Invitational Classic
10.00 Prize Giving
Posted by David Benson at 8:48 AM No comments: 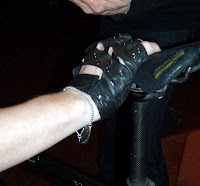 Mayhem reigned on and off stage last night, as an unruly coven of mouthy and partisan Fixie Hipster WAGs gave MC John Bridges a run for his money.

First up on the rollers, celebrity economist Chris Tennent-Brown opened the bidding with an 18.2 second effort that would have put him into last weeks final, before quitting the field in favour of dinner.
Not to be outdone by someone who was riding before he was born, Alex Cull cranked out a 17.5, sending himself to the semis along with Tony Wilkinson, a surprised and slightly terrified Darryll Parker, and shirtless Steady Rolling Crew wildman Teva Chonon.

In the semis Cull and Wilkinson despatched their opposition for an all-Cycle City final which Cull won handily. Six women and a masked transvestite fronted for the Girly Bits competition, which saw the Mayhem Session's first ever deadheat as Rosie McCall and Kate Mullarkey reprised their annual rivalry at the Manukau Velodrome to post the second fastest qualifying time of 20.9.

The sublime Gayle Brownlee of Solo topped the standings with a 20.4, and Claire Routledge's 22.0 filled out the last 4.

Seeded together again in the semi, Rosie and Kate again made Mayhem Sessions history as McCall defeated Mullarkey in the Session's first ever photo finish. Gayle demolished Claire with a 19.9, then cranked out the same time to defeat Rosie in the final.

Justin Grace regained the SEIC trophy from Damian Wiseman, choosing to race rather than armwrestle, and set a new record of 16.0seconds.

Mayhem Session #4 will be back at the The WINCHESTER, 24 St. Benedicts Street from 7pm on Wednesday 27.

Posted by David Benson at 12:07 PM No comments:

A message from Gayle:

In light of recent shenanigans (thoroughbred-thighed, bare-chested gladiators grunting and straining in the spotlight), we think it’s time something sexy was introduced to the Mayhem Sessions.

This Wednesday we’re adding a women’s section to the proceedings.

All of you beautiful women who have been quietly waiting for the right time to race are invited to get up and show the lads why svelte is better than sweat.

Come early for a spot of practice.

Entry is free for anyone who riding in stockings and a miniskirt.

Bring your own bike or borrow one on the night.

Prizes for the fastest and the hottest.

The WINCHESTER, 24 St. Benedicts Street from 7pm
As the Winchester is a licenced venue, this is an R18 event. Eddie Wingrave-King of the RollersOriginally uploaded by Jono 01
Posted by David Benson at 11:02 AM 2 comments: 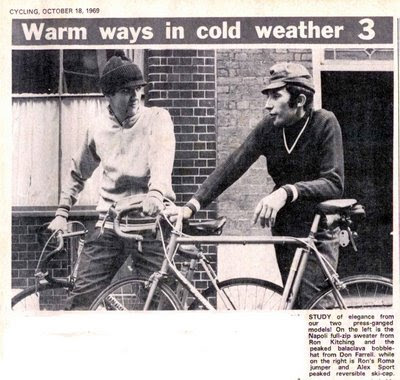 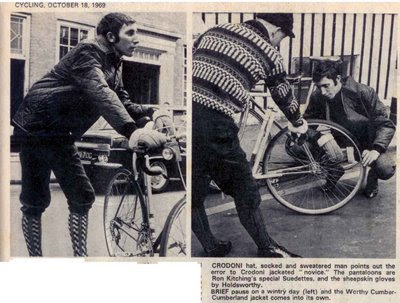 It would seems that 90% of all new content on the internet this week is about the Mayhem Sessions at the Winchester.
This morning Ron King alerted me to a couple of vids on Youtube, one of which deducts a few seconds more from my Warholian allocation.


Simon Bittle vs Yours Truly. Though we both managed to stay upright, our lack of speed is glaringly obvious.

.. and pictures over at Steady Rollin' and Sole Jam.
Posted by David Benson at 6:00 PM No comments: 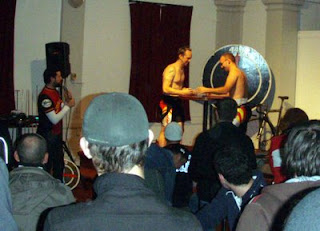 Due to technical difficulties, last night's Elite Final was decided by an armwrestle between eventual victor Damien Wiseman and defending champ Justin Grace.
Wiseman went the hard way to the final, crashing off the rollers in his heat, but getting back into the competition in a reride against last week's Free for All winner Andy Williams.

In the Fast Rolling Free for All, trackie whippet Jono Hailstone saw off a strong challenge from Peat Alexander who was riding one of his own carbon fibre Zenyth frames.

Mayhem Session #3 will be back at the The WINCHESTER, 24 St. Benedicts Street from 7pm on Wednesday 20. There will be a womens competition, so get your fishnets out.

MORE PHOTOS
Posted by David Benson at 1:06 PM No comments: 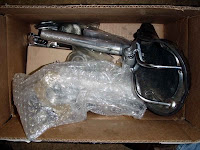 I am wont to view as auspicious the rediscovery in my inventory of anything that seems especially compatible with my current project; and even to view such discoveries as a vindication of my enthusiasm, but this is self serving bunkum.

In truth, any CBAD sufferer with inherited magpie instincts will eventually reach the state of owning more junque than one can possibly use in a lifetime, with the happy result of always having to hand a few relevant widgets and knickknacks; and a more unhappy result for one's heirs whose task it will be to shovel away away the clutter on one's demise. 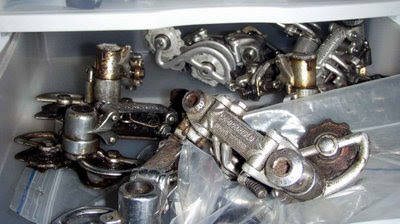 Posted by David Benson at 9:10 PM No comments: This morning dawned crispy cold and fine, a total departure from the meteorological norms of the past few weeks.
I stayed abed until it was finally warm enough to sustain normal life, but such a fine day calls for an outing on a shiny new bike, and in the Roy Thame I had just the thing.
Furthermore my newly acquired Marresi shoes needed a tryout, so I kitted myself up, pumped up the Thame's tubulars and took myself for a lap of the ride known to Auckland's cycling community as 'the Shitponds'.

The Roy Thame is probably the twitchiest bike I have ever owned. The steep head angle and light frame combine to produce a mild shimmy if it is ridden one handed with a tight grip on the bar- loosen up and it goes away.
With 28 spoke tubulars it feels fast and buzzy, but I never got out of the small chainring, so the proof will have to wait for another day.
To my surprise, the narrow SR World Champion bars (only 38.5cm at the hoods) did not feel too bad. At the drops they measure 41cm c-c, but I didn't spend too much time there today.
Posted by David Benson at 1:31 PM No comments:

An unexpected addition to the stable.
I traded this, plus a yet-unseen parts package, for my Condor Italia loaner.
Like CT-B's Holdsworth Italia it was built by Reg Collard for the F.W Holdsworth retail shop.
The lack of chrome and brazed on brake cable hanger suggest 1968 or 69.
Despite the italian influence that held sway at F.W Holdsworth, this frame is a laidback Luxo-Cruiser, with 103cm wheelbase and parallel 72.5 degree angles. It has a full set of braze-ons, including downtube guides & stops for bar end shifters.

I should point out that I don't have any secret knowledge about these frames- everything that I think I know comes from Norman Kilgariff's excelent Holdsworth website, especially the pages on the Holdsworth Campagnolo professional team, and the Holdsworth Professional.

Posted by David Benson at 9:27 PM No comments: It is likely that the Winchester in St Benedict St has never seen such a diverse crowd as the bike couriers, fixie hipsters, tattoed scenesters, BMX outlaws, egomaniacs, roadies, trackies, masked strangers, Captains of Industry, media personalities, lesbians, economists, mechanics, appalled passers-by, drunkards and scandalized regulars who were there last night for the first round of the Mayhem Sessions roller racing season; and that even in its past days as a Masonic Lodge no weirder rituals were enacted there.

Mayhem Session #2 will be back at the The WINCHESTER, 24 St. Benedicts Street from 7pm on Wednesday 13.
On August 20th, there will be a womens competition, so get your fishnets out.
Posted by David Benson at 9:37 AM No comments: As I write, CT-B is no doubt parading his new Rapha Andy Hampsten Jersey around his batchelor quarters, and pining for a matching Pegoretti4Hampsten or a limited edition replica of Hampsten's 1988 Giro winning bike by Landshark.
Posted by David Benson at 9:35 PM 2 comments:

Forgive us our trespasses P8020005
Originally uploaded by bensondoc
Gaz and Money help themselves to a scenic shortcut during today's ride to Il Forno, where we solved many of the worlds ill and ate doughnuts.
Posted by David Benson at 9:20 PM No comments:

The Way to Fame is on a ROY THAME Frame

From INTERNATIONAL CYCLE SPORT July 1977
Posted by David Benson at 4:34 PM No comments: Rideable, but as yet unridden.
MORE PHOTOS on Flickr.

The final build is a bit different to my original plan:

The wheels pictured are the 28h Fiamme tubulars that I built for the Broomies Wall ride. If Roy and I get along, I will build a set of Araya 20A clinchers on Superbe small flange hubs.
Posted by David Benson at 2:04 PM 5 comments: